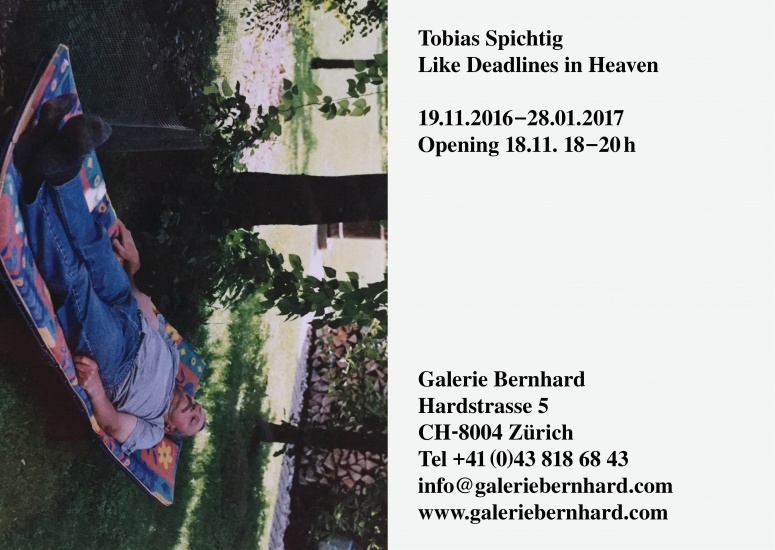 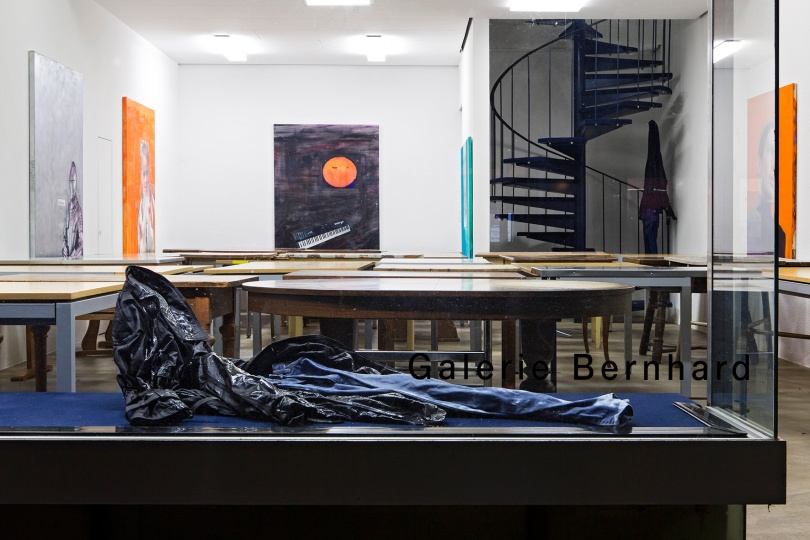 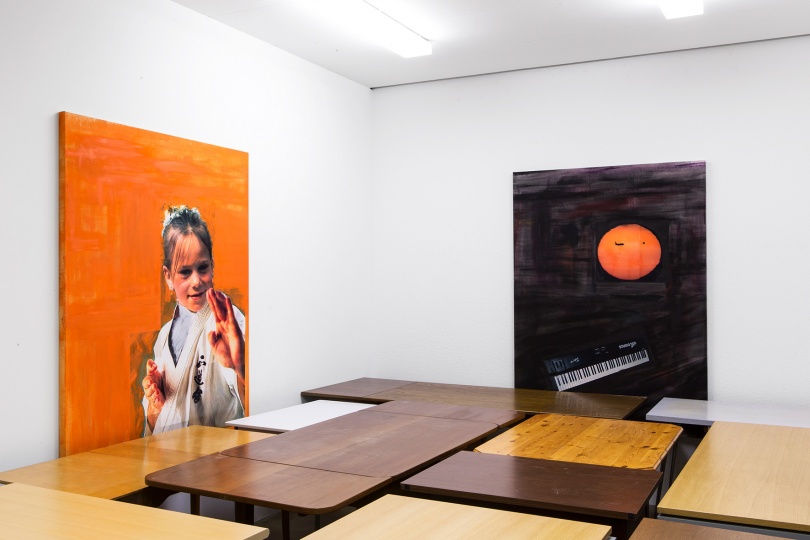 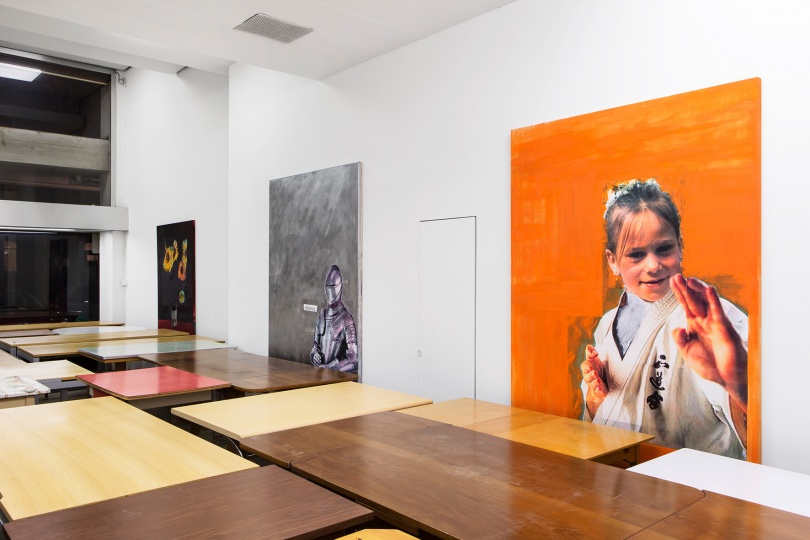 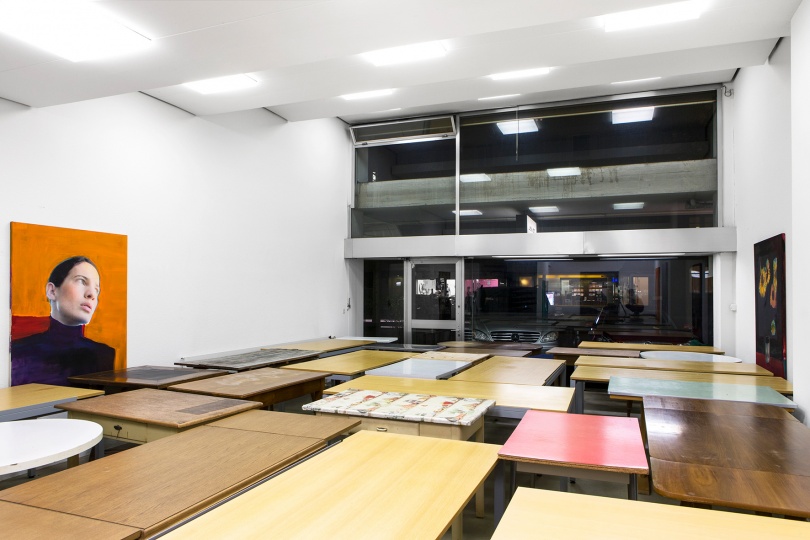 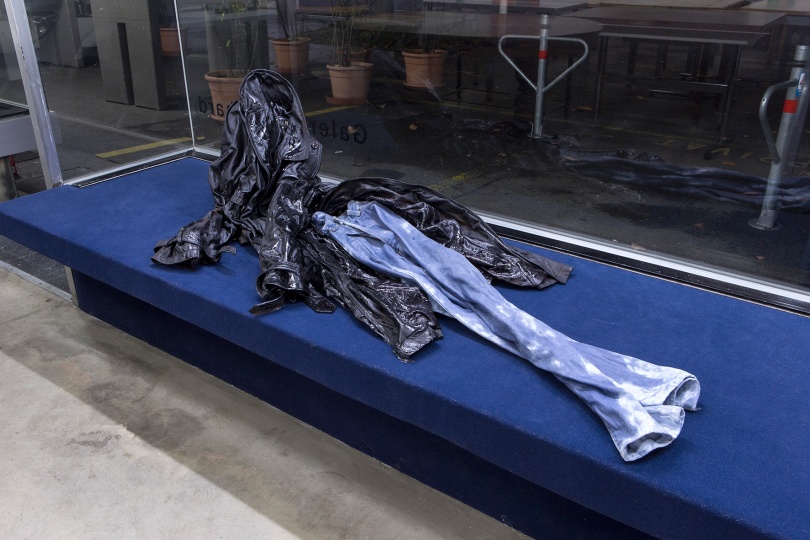 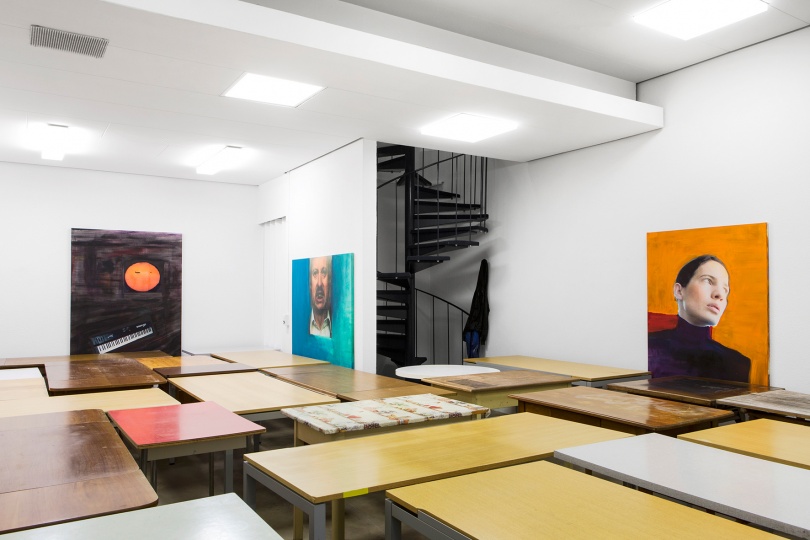 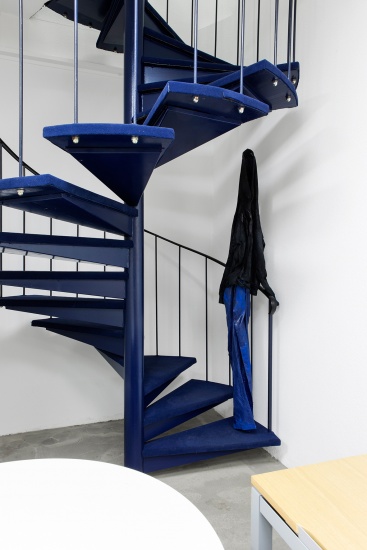 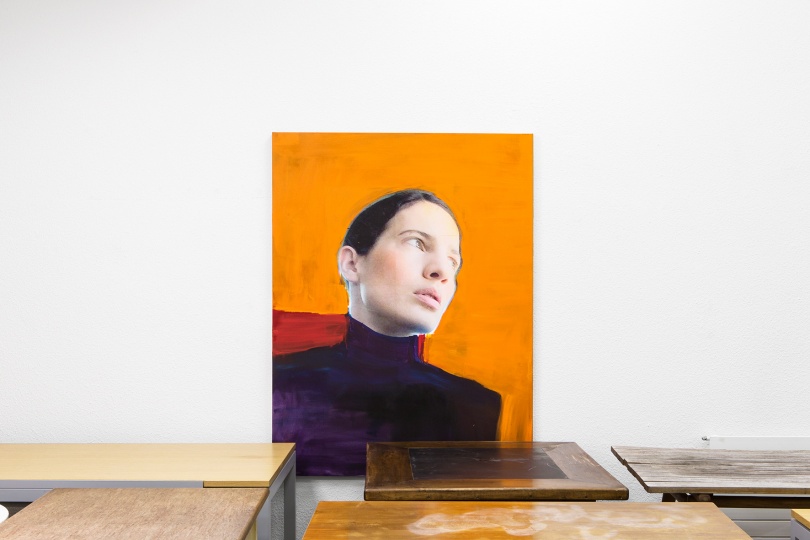 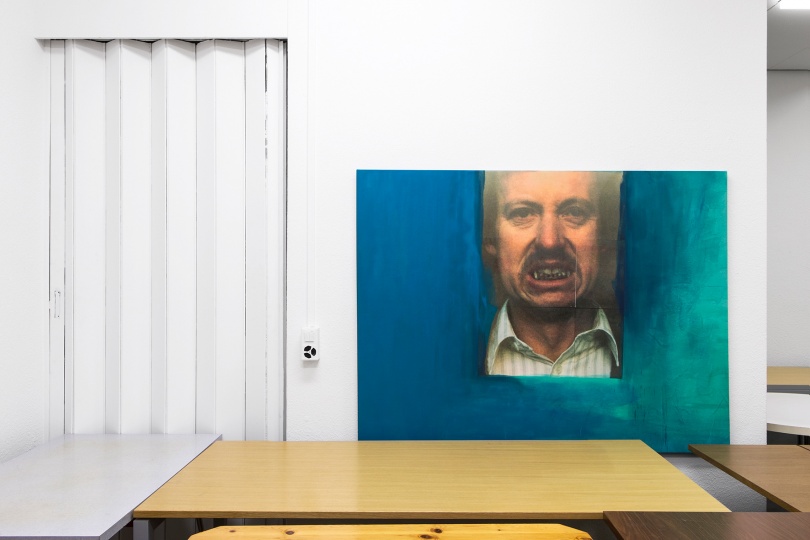 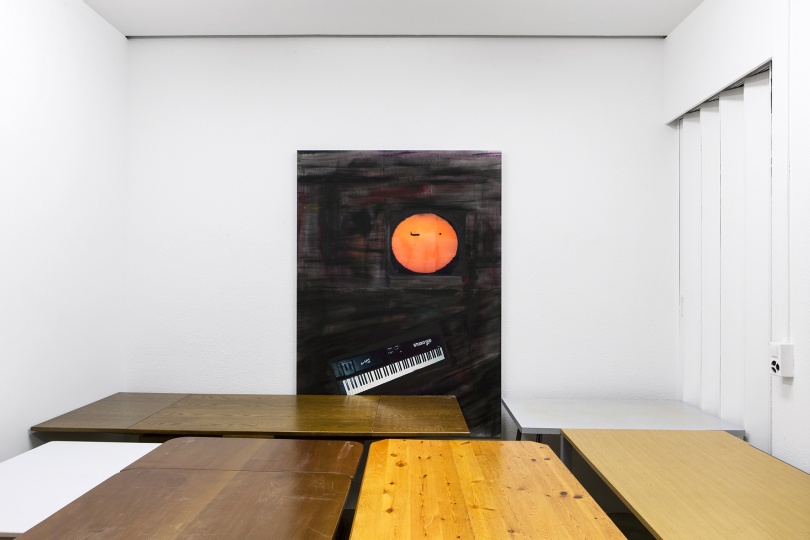 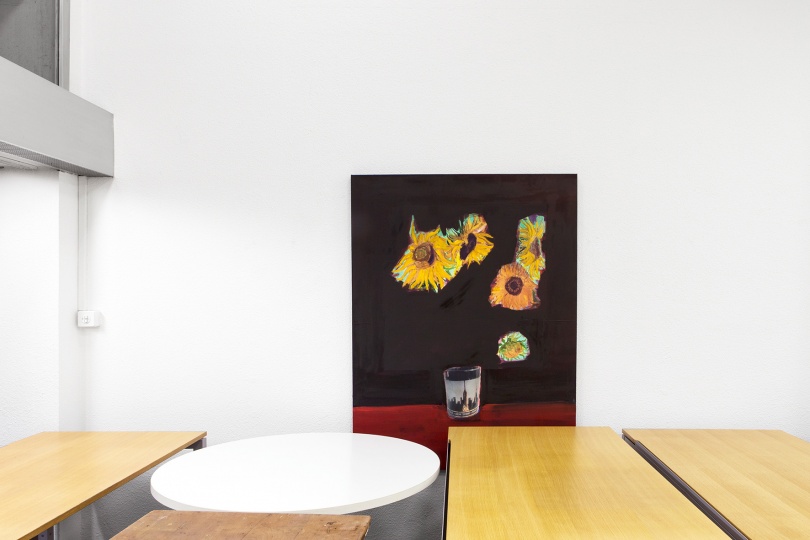 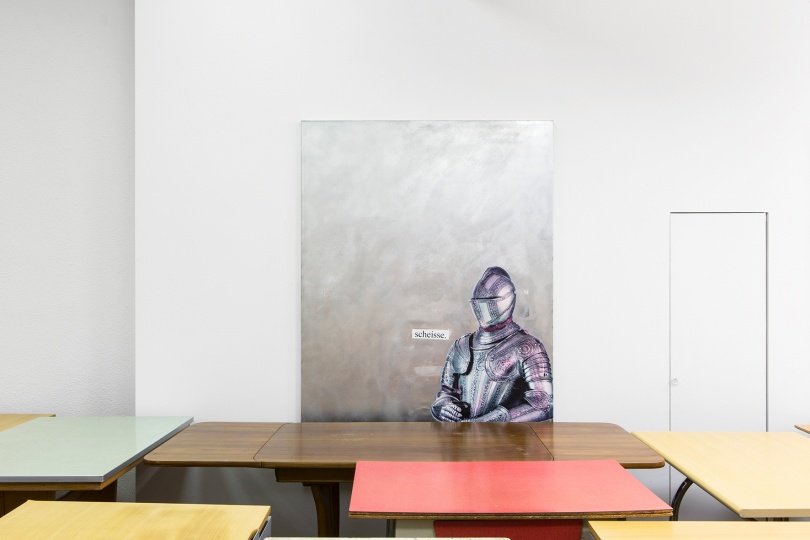 Let’s begin by considering activities and the times in which they take place. If we were to take an image, a snap-shot of a man lying in the shade in a garden on what seems to be a collapsible bed-for-one, we could assume it’s a warmer time of year–the shadows are stark and his sleeves are short. But when exactly? A summer break? When time is taken away from work? The summer here this year extended its reach well past its usual termination, and as this man is at rest and his age suggests he’s had a life already full with work, it’s quite possible he’s retired.

Is though this man’s working life, or cessation thereof, of our concern? We encounter the image because it is used as the invitation for this show that opens as winter takes hold. We read alongside this summer-tranquil scene, Like Deadlines in Heaven, and like the end of summer, the original deadline for this show was postponed. It’s the reason I could consider writing this. It’s why I sit now at my work table and attempt to write an introduction to a show I’m yet to see, have encountered in only parts and as projections, in conversation, and from ghosts of other shows. It’s why I contemplate these images and the disjunctions their titular significances suggest. But time is running out! Where’s the Heaven in this?

This Heaven gives me migraine

This Heaven gives me migraine[1]

So I do the work of engaging with the out of time, the out of place, with part objects, of considering what these images are doing as they emerge from signifying-chains, possibly adding to them myself in the process. It’s a psychic work, and although you’ll encounter these disjunctures and emergences theatrically, in space, the work you do will be similar. Is there something despotic going on here? In this Heaven? Tables, whether once used for work—like this one right now—or for eating/drinking/procrastinating, are all used up, retired. But all their used-up-ness returns, crowding the space with different alphabets, interrupting your movement as well as a series of paintings hung in the room, as if they arrived late all noisy. Is their return a glut of recording devices composing, as a whole, a kind of stage or platform for both this noisy production and your efforts? Or does the composite simply work to frustrate the productive orders they were once part of, as well as, of course, frustrating your view of the paintings?

The sleeping man in the summer image returns too. He happens to be the artist’s father but this time he’s wide awake and appears menacing. Luckily, the work’s title alerts us to the fact that his bared teeth are a post-op show-and-tell, and not a grimace. Each of the painting-collages consist of singularities that seem to be drawn from a bank of subjective affinities, none of which really appear to correspond to an overall narrative. A few recall the snap-shot status of the invitation image, yet each are extracted from their contingent fields, and although their titles are familiar in tone, they don’t draw us away from this conclusion. Formally we could note that both female figures appear floating in/on orange, or that the two painting-collages heavily coloured with black harbour two disparate images. Are they each performing on that stage? Albeit under duress? The presence of a third order of works seems to deny this fact, as if indeed the paintings were hung conventionally, even decoratively in the room before the tables arrived. They too are are wrested from their former places of use or significance, populating this estranged setting. Constructed from clothing, they can inhabit postures because they’ve been drenched in resin, and whether from the staircase or from under the stage, they have the last word here. They speak by way of their naming and they do so directly.